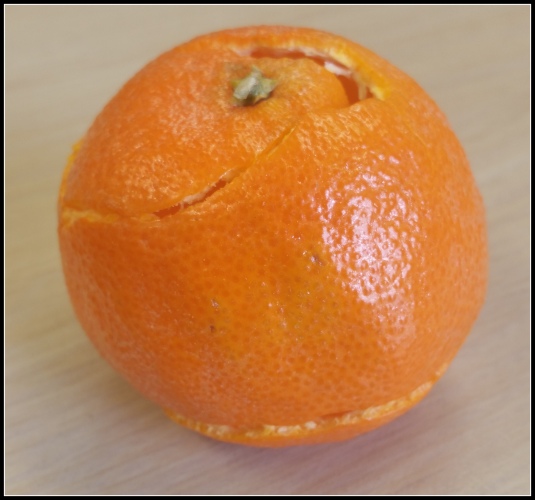 Living in California means enjoying delicious citrus fruits all the year round, like navel oranges, lemons, limes, pomelo and grapefruit. In fact, all of these fruits are sorely missed by me when I’m living in Korea. Unlike California, Korea has four very distinct seasons, including some very, very cold winters–and this basically translates into a lack of good, domestically grown citrus fruit. Yet oddly enough, Mandarin oranges (aka “clementines”, “halos”, “cuties”, “tangerines”, etc…) are extremely common in Korea, especially in the winter months.

It wasn’t until I started living in Korea that I started eating these orange spheres of deliciousness with regularity. Given how small they were, I rarely ate only one, and I often ended up with a small pile of peels that needed to be thrown away. I hated trying to pick up lots of peel pieces, especially if I had put my mittens back on since it was probably a cold winter’s day when I was enjoying my mandarins. It may seem really silly, but I was very taken with the idea of trying to peel my mandarin in one l-o-n-g piece instead. It made it very easy to grab the peels to throw away, and it looked pretty cool to boot! Soon after I mastered peeling my mandarins in one go, I started to play around and reconstruct the peels as close as possible to the original mandarin’s 3D form. Yes, if it’s not clear already, I am very easily amused! But aren’t they neat to look at? I would love to take it a step further and actually glue the edges of the peel to completely restore the mandarin orange’s shape!

Penny for your thoughts-- please leave a comment! Cancel reply